It’s back! The beloved zombiepacalypse drama returns for its sixth season and this hour long episode kick things off with a bang.

The opener, titled “First Time Again”, deals with the aftermath of last season’s ending as some of the residents of the safe haven village Alexandria are still angry and confused about Rick’s (Andrew Lincoln) ruthless actions. The episode flits back and forth between flashbacks of the fallout and present day scenes of Rick and co trying to deal with probably the biggest swarm of zombies the show has seen to date.

Six seasons in and The Walking Dead still manages to keep things fresh as the alternating timelines of this episode make it feel very different to the 67 episodes we’ve previously seen. We’re not quite sure what’s going on as the episode keeps the events shrouded in secrecy but always builds a gratifying sense of suspense and momentum.

It begins with Rick and the group overlooking a quarry where thousands of the undead are aimlessly based. Rick has a plan of defence against the humongous horde of walkers: attack! We never know the real details behind the risky, seemingly insane plan, but the excitement of the episode comes from the mystery and madness of the sceme that the group are trying to pull of.

Throughout the the time switches, we get to check back in with some of our favourite characters. The creepy Father Gabriel is once again freaking out – this time leaving after the gate open in last season’s finale. Sasha seems to have recovered from her mourning of her brother Tyreese’s death and found a reason to want to live again. Glenn’s forgiveness of the cowardly Nicholas appears to have changed him for the better. The hilariously awkward Eugene’s being – well, Eugene. And Carol puts on her “everything is normal” face while trying to subtlety persuade everyone to comply with the Ricktatorship.

Of course, like the majority of other TWD episodes, “First Time Again” is dominated by Mr Grimes. Again we see how the harshness of the outside world has shaped Rick’s mentality. The survival of the fittest seems to be Rick’s sole agenda as he explains how the weak are burden. It seems he’s going down a dark path as it is becoming increasing more difficult to empathise with him and understand his motives, which is probably the writer’s intentions. 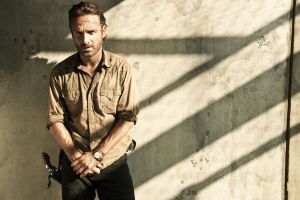 Morgan (Lennie James) being firmly reintroduced as part of the story works brilliantly as he’s a character who sees the disturbing turn Rick’s taking with fresh eyes. Hopefully there will be a interesting dynamic later down the line between the two as Morgan could serve to be the moral ying to Rick’s yang.

Overall, a decent opening episode which plants some intriguing seeds for later down the line.The incredibly tense action scenes are complemented well with the smaller, quieter character-driven moments. The episode ends on a cliffhanger which will have you hungrier for the next episode than the zombies are for human flesh. “First Time Again” scores a: