Visionary director Guillermo Del Toro has given the world many cinematic treats including his breakthrough effort the dark fantasy Pan’s Labyrinth (2006), supernatural superhero flicks in the Hellboy franchise and big budget robot-vs-monster mayhem in Pacific Rim (2012). The Mexican returns to his gothic roots with his new film Crimson Peak.

Carter is visited by the English Sir Thomas Sharpe (Tom Hiddlestone – best known for Loki) for a clay mining business proposition which falls flat. Thomas’ proposal doesn’t end in complete failure as he catches the attention of the previously romance-rejecting Edith, who falls for the charming man behind the glowing green eyes. His piano playing sister Lucille Sharpe’s (Zero Dark Thirty’s Jessica Chastain) eyes don’t glow green with charm but instead with ice cold envy at her brother’s new sweetheart. Edith and Thomas quickly fall in love, marry and move to Thomas’ home back in England along with Lucille. 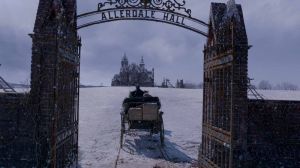 This is where the film really hits its peak (no pun intended) as Edith’s new home, Allerdale Hall, that she shares with her husband and sister-in-law turns out to be a haunted house. And it’s a thing of broken-down beauty. The vast three storey mansion, inhabited by the Sharpe family for 200 years, has a gigantic hole in the roof and sits on top of a clay mine which it is slowly sinking into. This causes the walls and floorboards to ooze blood-red clay. The once marvelous mansion is now a decaying, bleeding shadow of its former self although it does have a certain alluring elegance, albeit fading. Del Toro and production designer Thomas E. Sanders deserve a lot of credit for crafting such a gorgeously gothic haunted house from scratch.

As well as being home to the Sharpes, Allerdale Hall houses a number of ghosts which stalk the aisles and frighten the living daylights out of Edith. These spirits of the undead look very unique to many of the ghosts seen onscreen before – they’re skeletons with rotting flash dangling from their bones and covered in the same red clay that bleeds from the house. The ghastly ghouls lead to some nervy jump scares which are accentuated by the eerie score and the camera creeping down the corridors. The most terrifying moment definitely comes in the opening scene which is guaranteed to freak you out. There aren’t really enough of these scary scenes for Crimson Peak to be considered a full blown horror film but the majority of them do provide chills.

While I found the visuals exciting for my eyes, some the film’s predictable plotting had them rolling. Things happen which you can see coming from a mile off which leads to the supposed big twist feeling rather anti-climactic as the pay-off just isn’t there. With the appearances of the ghosts, Del Toro does a fantastic job of shrouding them with mystery and suspense. But then it turns out that they don’t play much of a role in the overall story which leaves lot to be desired. It’s like Del Toro seduces you then kind of disappoints when it’s time to deliver – its OK Guillermo, we’ve all been there.

Despite a lacklustre story the talented cast all do their best with the script and produce some decent performances. Wasikowska is excellent as the spirited Edith and she shows great range which leads to a convincing, well-rounded performance.

The role of Thomas seems like one that Hiddlestone could play in his sleep as he effortlessly exudes gentlemanliness and mysteriousness.

Chastain’s twisted turn as the scheming and ruthless ice queen Lucille is admirable as she usually plays much more likeable characters.

The trio of leads all have great chemistry with each other although they maybe could have done with a couple of extra scenes to further display how Thomas is torn between his wife and sister.

Sons of Anarchy star Charlie Hunam puts in a solid supporting performance as the doctor/amateur detective who has a thing for Edith.

A stellar cast and some stunning visuals could have made Crimson Peak a contender for the shortlist of the year’s best films but it’s slightly let down by some stale storytelling. Cruel Intention meets The Sixth Sense would be a good way to describe the film, which just falls short of living up to its true potential. It’s definitely worth a watch as there’s a chance you may like it a little bit more than I did. Crimson Peak scores a:

Check out the trailer here