It does what it says on the tin 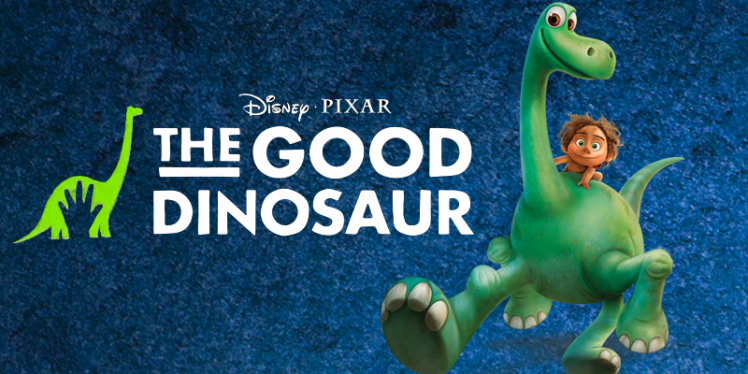 The idea behind every film Pixar has blessed the world comes from the question ‘What if?’ For Toy Story, they asked ‘What if our toys came alive while we weren’t looking?” For Monsters Inc it was ‘What if there were really monsters hiding behind our closets?’ In the case of Pixar’s latest film, The Good Dinosaur, it’s ‘What if the dinosaurs were never extinct?”

Pixar’s second film of 2015, coming after summer’s astonishing Inside Out, begins 65 million years ago with the asteroid that drove the dinosaurs to extinction missing the Earth entirely. Millions of years later, the dinosaurs are fairly civilised – they can talk, build and farm.

The titular dinosaur, young Arlo (Raymond Ochoa), belongs to a family of five farming Apatosaurus. As the smallest of three children, Arlo struggles with his farm work and the fact that he’s afraid of nearly everything doesn’t help either. The farm’s corn crops are repeatedly raided by a young feral human boy, Spot, and an attempt to catch the wildling leads to a disastrous result for the family.

Blaming Spot for the catastrophe, Arlo chases the boy but the two end up washed away downriver by a flash-flood. Far away from his family and with only newfound friend Spot for company, Arlo must overcome his fears and embark on a danger-filled journey to get back home.

The story is simple enough and resembles nearly every Pixar plot – two characters initially at odds find themselves lost and then go on an adventure to return home.  Also similar to many Pixar films is  The Good Dinosaur’s intelligent and imaginative premise which sees the roles reversed between humans and beasts as the dinosaurs are the civilised beings while humans are the wild creatures.

This leads to a brilliant boy-and-his-dog dynamic between Arlo and Spot. The two share some moving moments with each other which are guaranteed to both warm and break hearts. Smiles will leap across faces when Arlo and Spot joyously climb a mountain top above the clouds. Tears will fall when the pair use sand and sticks to narrate to each other their painful histories.

The Good Dinosaur surrounds the duo with some absolutely stunning visuals which are bound to amaze you. Director Peter Sohn and his team of animators create phenomenally photorealistic landscapes which transport you into the prehistoric scenery. The attention to detail on the vast surroundings is incredibly impressive.

The designs of the dinosaurs are quite cartoonish and are noticeably different to the real-world-looking animation on the backgrounds. Still, you can’t blame Pixar for the cartoony look as it makes perfect sense (and Disney lots of merchandise money) to appeal to children.

Speaking of little ones, The Good Dinosaur is surprisingly grim for a kids film. Some of the creatures Arlo and Spot come across – a savage prehistoric snake and gangs of vicious velociraptors and pterodactyls – may frighten some younger viewers. The film’s fairly violent with some beasty battles and most shockingly a decapitation (although to be fair it is played for laughs).

Laughs themselves are pretty scarce in The Good Dinosaur. The first twenty minutes has giggles but after that the comedy is as rare as dinosaur fossils.  As well as an emotional rollercoaster and great visuals, you expect lots of laughs from a Pixar film but unfortunately The Good Dinosaur is disappointingly unfunny. The film is in desperate need of something –slapstick humour, a kooky standout character or a good recurring joke. Just basically anything attempting to be funny would have done the trick. Some of the most memorable kids films have tragedy but they’re balanced out with plenty of comic relief.

Here the lack of laughs means that the film feels overly sentimental and serious. So serious in fact, that you’d be surprised not to see Christopher Nolan’s name in the credits as the director (come to think of it ‘The Dark Dinosaur’ does have a certain ring to it).

Along with very little comedy there are a few scenes with other species of dinosaur which aren’t really executed to their full potential which reflects the feeling for the film as a whole.  The Good Dinosaur has had some well-documented production troubles – a directorial change halfway through development – which could have impacted its overall quality but it’s worth noting that Ratatouille had very similar issues and still turned out to be fantastic.

Overall The Good Dinosaur is just simply good. It’ll provoke some thought on what the world would look like if humans weren’t the dominant species and has an admirable message that fear can be overcome.  It would be unfair to call Pixar’s sixteenth film its worst but it is certainly not near the studio’s best. The Good Dinosaur scores a:

Check out the ranking of every Pixar film here

3 thoughts on “The Good Dinosaur Review”