It’s been over a month since The Flash has whizzed on to our screens and the first episode of 2016 saw the show enter the New Year in style.

The episode – titled “Potential Energy” – kicked off with Barry having a harrowing nightmare about Patty being killed by his mysterious nemesis Zoom. This was a great introduction to Barry’s dilemma which was the main theme of the episode: does he reveal to Patty that he is The Flash or does he keep his secret hidden from her to keep her out of danger?

Thanks to Grant Gustin and Shantel VanSanten’s sparky chemistry, Barry and Patty’s relationship quickly has become a very watchable and enjoyable factor of the show. With their romance taking a serious turn, Patty hopes to move past the fun stage which is a sentiment Barry agrees with. After getting advice from Iris, he decides to tell his new girlfriend he’s The Flash but a stern warning from Harry Wells about his enemies using his relationship makes him think twice.

It makes sense for Patty to know the truth as practically everybody on the show already knows Barry’s secret identity. He’s about to tell her but is twice interrupted. In the first instance, which takes place in a ballroom scene (something that seems almost mandatory for a superhero TV show or film to include) he’s stopped by The Turtle who very nearly kills Patty before she’s saved by The Flash.

Barry’s fears about his loved ones getting in harm’s way come true once again when Patty’s abducted by The Turtle, who makes a change from the previous few villains as instead of being thrown into Earth 1 by Zoom, he was changed by the particle accelerator. The Turtle turned out to be a genuinely formidable foe to The Flash as his ability to slow down time made me wonder how the Scarlet Speedster was going to take him down.

As he liked to steal things people coveted the most, he kidnapped Patty after releasing that The Flash had feelings for her when he saved her from the falling chandelier. How The Turtle knew Patty was special to the Flash seemed a little too contrived to me as superheroes aim to save everybody, not just those they care for.

Despite that bit of silliness, The Turtle’s bout with The Flash led to a thrilling and tense climatic battle as Barry had to fight somebody who could negate his speed while Patty’s life hung in the balance. After defeating the Turtle and rescuing Patty, it seemed like Barry had the perfect opportunity to unmask in front of her but for some reason he chose come clean later on.

When he’s about to tell Patty for a second time, she drops a bomb first and tells him she’s going to move to Midway City in the hopes of becoming a CSI detective. By the end of the episode Barry and Patty’s blossoming relationship looks like it’s on the rocks.

“Potential Energy” sees another troubled relationship come to play, this time between Joe and his newfound son Wally. In a bid to make up for lost time, Joe is eager to build a relationship with Wally who himself isn’t so keen. Thanks to the always convincing Jesse L Martin, you’re heart goes out for Joe who just wanted to know his son while Keiynan Lonsdale made sure you also understood Wally’s resentment towards his absent father. It was nice to see that by the end of the episode, they started their gradual path towards a bond. I look forward to seeing more of their dynamic throughout the season.

While I felt the emotional impact of the Barry/Patty and Joe/Wally relationships, Jay and Caitlyn’s drama didn’t quite resonate as strong. We learn that Jay is dying of some unexplained illness and only his speed returning to him can save him. Jay’s a likeable character but it seems like he’s just on the show to woo Caitlyn. Hopefully he can regain his speed fairly quickly and become a character that has a purpose.

One character who certainly has a purpose is Harry Wells. I was a bit sceptical of them introducing the Earth 2 Harrison Wells, but this crankier, more pessimistic version appears to be a good addition to the show. He has a great but grim conversation with Cisco about Zoom which gave the villain even more evil credibility and increased our desire to see Barry take him down. It looks like Harry’s seemingly fatal tampering of The Turtle in S.T.A.R Labs will hold the key to the toppling of Zoom. Or maybe Harry has another, more sinister motive…

The episode ended in exciting fashion as we see the Reverse-Flash, this time as Eobard Thawne, surge into suburbia, unsure as to where he is. Presumably he’s arrived from Earth 2 and it’ll be very interesting to see how his sudden appearance affects The Flash and co.

Overall, “Potential Energy” provided us with a decent reunion with our favourite Scarlett Speedster. It had the usual funny banter flowing between Team Flash, a challenging villain for The Flash to face, some investable emotional drama and posed some intriguing questions which I can’t wait to be answered in future episodes. “Potential Energy” scores a: 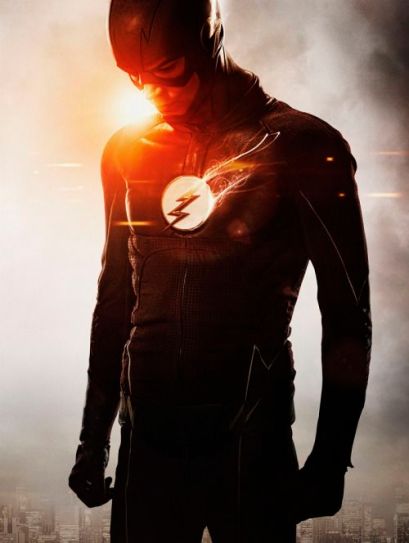 What did YOU think of this episode? Feel free to leave your thoughts below.