When it comes to sports in England, football (not soccer, you silly Yanks, it’s football!) is the most beloved choice all the athletic competitions to watch and play. The game of football is the common denominator between people of all walks of life, the conversation starter on a Monday morning and a source of undying faith for those without a religion.

Even though a few teams in the Premier League have surpassed my beloved Manchester United, no sport will ever exceed my love for footie, but with the popularity of American Football gradually growing in the UK, my interest in the NFL has steadily increased too.

Don’t get me wrong, for the majority of the time watching an American Football game I have no clue what the hell’s going on , but I certainly do know that I enjoy what I’m seeing. Thanks to a number of NFL games taking place in England, the sport’s increased presence on UK television and a number of related films, I’m exposed to more and more American Football and can’t wait till Super Bowl 50 this Sunday.

The prestigious game will see the Carolina Panthers take on the Denver Broncos and in celebration of the upcoming big final, here is a countdown of my favourite American football films.

Loosely based on the true story of the Kilpatrick Munstangs’ 1990 season, Gridiron Gang sees juvenile detention camp counselor Sean Porter (Dwayne “The Rock” Johnson) create a football team in order to give the boys under his ward something to believe in. Although it’s packed to the brim with cliches, Gridiron Gang offers an enjoyable take on the redemptive qualities of sport. 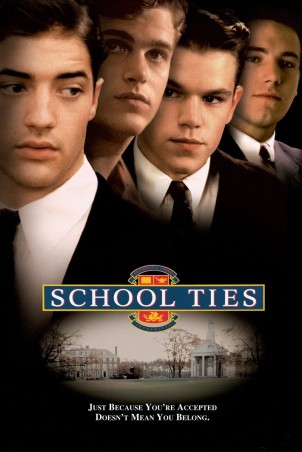 Set in the 1950s, Brendan Fraser stars as teenager David Greene, who after receiving a football scholarship to a prep high school, has to keep a secret hidden from his new teammates, classmates and roommates. As well as Fraser, School Ties stars Matt Damon (who shines in a particularly nasty role), Ben Affleck and Chris O’Donnel. While it reeks of predictability, the performances of young Hollywood stars make it a very sold and watchable experience.

This remake may not live up to the legacy of the 1974 original but it succeeded in being a fun filled sports comedy thanks to the humour of Adam Sandler and Chris Rock. It sees a group of imprisoned convicts go head to head with the prison guards in a good old game of (American) football. It’s fair to say that it won’t last in the memory of critics, but when thinking of (American) football-based films it’s certainly memorable to me. 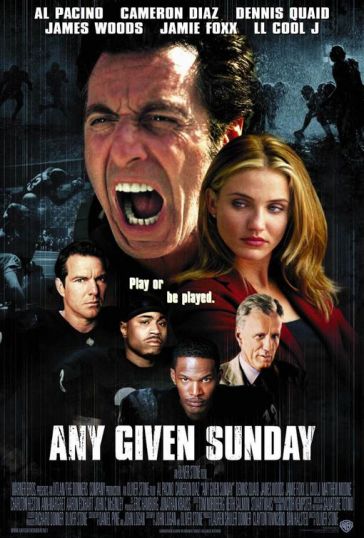 Oliver Stone’s drama see the fictional Miami Sharks head coach Tony D’Amato struggle to lead his team to the play-offs as he has to juggle the demands of the team’s young owner Christina Pagniacci (Cameron Diaz) and the increasing ego of his new quarterback Willie Beamen (Jamie Foxx).

Any Given Sunday has perhaps the best and most brutal football scenes out of any film in the list but it’s unnecessary length means it’s not higher on the list. Still, on the whole it’s an entertaining effort from Stone. 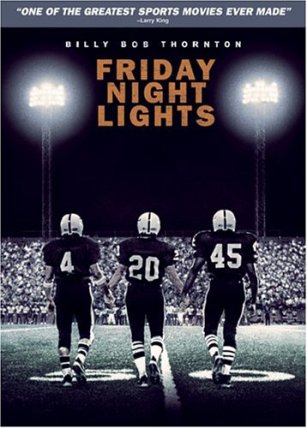 This adaptation of H. G. Bissinger’s 1980 book, Friday Night Lights: a Town, a Team and a Dream sees coach Gary Gaines (Billy Bob Thornton) deal with the trials and tribulations of running a small town team. Peter Berg’s involving sports drama went on to spawn a successful television show of the same name. 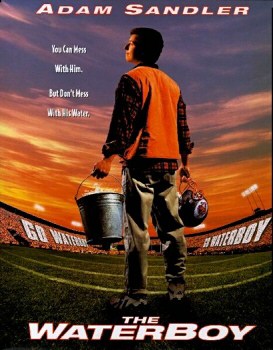 Nowadays Adam Sandler movies are disappointingly unfunny occurrences but The Waterboy sees Sandler in his comedic prime. He plays Bobby Bouche, a socially awkward momma’s boy with anger issues and a lisp, who becomes the defensive rock for a downtrodden college team.

Similarly to Sandler’s other film on the list, The Waterboy was unliked by critics but became a cult hit among fans and a big financial success earning $185 million off a $20 million budget.

It’s somewhat of a stretch to call Ace Ventura a sports movie, but it’s kooky plot revolves around the NFL so its on the list. When Miami Dolphins mascot Snowball is kidnapped two weeks before the Superbowl, animal sleuth Ace Ventura (Jim Carrey) goes on the case to retrieve the missing talismanic bottlenose dolphin.

This was Carrey’s first leading role in a film and it launched the rubber-faced funnyman into super-stardom. One of my favourite comedies.

Set in 1971, this Disney produced drama sees Denzel Washington play Hermane Boone, a coach at T.C Williams High School who takes over a team racially after a white school and a black school are merged together. While the film obviously tackles the theme of race, it offers great value entertainment as a message and is driven by Washington’s powerhouse performance. Out of the many football films, Remember The Titans is hard to forget.

This adaptation of Michael Lewis’ 2006 book The Blindside: Evolution of a Game is the true story telling of Michael Oher’s journey from impoverished product of foster care to being adopted by Leigh Touhy (Sandra Bullock) and her husband before enventually becoming an NFL superstar.

The Blind Side went on to become a critical and commercial hit earning rave reviews and raking in over $300 million worldwide, making it the highest grossing sports film of all time. At the Academy Awards, it was nominated for Best Picture with Bullock picking up a gold statute for Best Actress.

More of an equal blend of comedy, romantic drama and sports movie than a full-fledged (American) football film but when thinking about flicks related to the sport, this has to be included. Tom Cruise plays the titular sports agent who after being fired for his change of heart towards his profession’s ethics, must prove his worth as a moral agent. He juggles representing Arizona Cardinals wide receiver Rod Tidwell (Cuba Gooding Jr)  with his new relationship with assistant Dorothy (Renee Zellweger).

Jerry Maguire was a success on all fronts earning $270 million worldwide and receiving glowing reviews. It garnered five Oscar nominations including Best Picture and Best Lead Actor for Cruise with Gooding Jr winning the award for Best Supporting Actor. And of course it birthed the famous line “Show me the money!”

What do YOU think about this list? Any films you think should be on here? Feel free to leave a comment

4 thoughts on “Top ten films about the NFL/American Football”