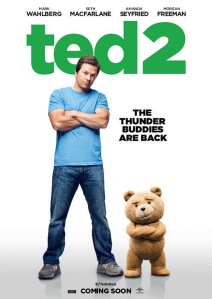 In 2012 the world was introduced to Ted, a foul-mouthed but loveable teddy bear who liked to indulge in bongs and beers. Polarizing is a fitting word to describe Ted as it was loved by some but to others its was simply – meh. Whether it was good or bad, the undeniable fact was that it was a smash hit as it grossed $549.4 million at the worldwide box office. And success only leads to one thing in Hollywood. A sequel.

Anyway, Ted 2 starts off with Ted (voiced by Family Guy creator Seth McFarlane) marrying his sweetheart Tammy-Lyn, who has a much better role this time. After deciding to adopt a baby, Ted and his newly-wed are shocked when the state court declares that not only is Ted unfit to adopt but he is actually not a human being. Which, to be fair, is a good point.

Meanwhile, Ted’s best friend and fellow Thunder Buddy, John (Mark Walberg) is still hurting six months after his divorce. To take his mind of his pain, he agrees to help Ted find a lawyer to fight his case against the court for his civil rights. Amanda Seyfried plays the lawyer in question, and is a weed-smoking rookie on her first case. To be fair to Seyfried, she commits to the role, but she doesn’t really have the comic timing to add much to the film, apart from being a good enough sport to be the butt of a few Golem jokes.

Like the previous film, the main source of laughter stems from Ted and John. The banter between them is often comedy gold as the chemistry between MacFarlane and Walberg is spot on. MacFarlane is effortlessly funny as the crude cuddly bear while Walberg shines as his man-child partner in crime.

Look out for a couple of cameos from some familiar faces, as the appearance of a certain somebody in a grocery store is particularly scene-stealing.

Not everything works in Ted 2 though. While it is littered with many laugh out loud moments, there are chuckle-free periods which can make some scenes feel too long and boring.

Also not every gag lands successfully, as some of the pop culture references (there’s a lot as to be expected from MacFarlane) may go over British audience’s heads.

The inclusion of Giovanni Ribsi’s stalker character from the previous film also appears to be very lazy writing as he seems to have been thrown into the sequel just to for the sake of having a villainous plot line in the film.  This detracts from the story which itself was not particularly great. Of course nobody really expects a riveting story from a comedy film, but as long as there is enough hilarity nobody seems to really mind.

While Ted 2 is very funny, it lacks any killer side-splitting scenes (think the hotel fight scene in Borat) that make memorable comedies, although the slapstick scene in the sperm donor bank comes very close.

All in all, if you like outrageous humor involving lots of swearing, than Ted 2 may be the film for you. Generally the shock-and-awe jokes hit their intended spot, although a Charlie Hebdo reference may push the boat out too far. Still Ted 2 is a slight improvement from the first film but still feels like and scores a: