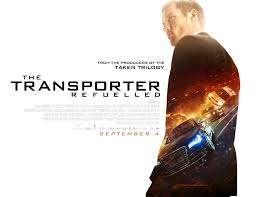 On the road to becoming an international action star, Jason Statham played the driver-for-hire Frank Martin in The Transporter (2002). The film was a modest success earning enough at the box office to spawn two even more successful sequels and a spin-off TV show.

Fast forward to 2015 and Frank Martin is back in a shiny new reboot starring Ed Skrein (ILL Manors) who steps into the shoes of ‘The Stathe’. Eagle-eyed Game of Thrones fans may recognise Skrein from season 3 as he played Daario Naharis before stepping down from the role in order to star in The Transporter Refuelled. Was giving up a regular role on a massive hit show like GoT to star in this film a good career choice for Skrein? Well… it all depends on how you look at it.

Similar to Statham’s incarnation, Skrein’s Frank Martin is the man you call when you need something picked up and dropped off on the down-low. He asks no questions and works by three simple rules: never change the deal, never leave any names and never open the package.

The film takes place in the south of France, where Frank is contacted by the mesmerising but mysterious Anna (Loan Chabanol) to make a pick up. Frank thinks he’s picking up two simple packages but it turns out he’s the getaway driver for Anna’s equally attractive friends Gina (Gabriella Wright) and Qiao (Wenxia Yu) who have just robbed a bank containing the money of  Russian gangster Karasov (Radivoje Bukvic). The three glam girls, joined by another gorgeous friend Maria (Tatiana Pajkovic) are former prostitutes who plan to exact revenge on Karasov, who pimped them out as children before they escaped. To do so they blackmail Frank into helping them by kidnapping his dad Frank Senior (Ray Stevenson). So Frank and the four femme fatales embark on mission to bring down Karasov once and for all.

After this point the film is partly mindless fun and partly just pure mindless. The fun comes from watching Frank in action – whether he’s behind the wheels of his two shiny Audi’s or whether he’s laying the smackdown on a group of thugs.

The south of France plays a beautiful backdrop for a couple of impressive high-octane car chases – one in particular nvolves a pulse-pounding dash through a crowded airport terminal.

Frank’s numerous hand-to-hand combat scenes will also entertain as the fights are extremely well choreographed and have a sense of bruising brutality.

When the film’s not offering amazing action sequences it offers dumb plotting which will have you scratching your head at the severe stupidity of the script. I can imagine when penning the script, writers Luc Besson, Bill Collage and Adam Cooper simultaneously scoffed “Logic – Schmogic” as they scribbled down their nonsensical story.

The dialogue isn’t as shoddy but at times the writers do try too hard to come up with something that sounds clever.

Transporter Refuelled also has multiple baddies and all of them are  written in a disappointingly wooden and clichéd manner.

Even though the film’s abysmal plot points are extremely cringey, there’s a quality to the film which stops you from transporting yourself out of the cinema.

Not only does the action make the script’s BS bearable but the performances help make the film watchable too.  Skrein’s effortless charm and charisma keep you engaged while Stevenson’s Frank Senior is a joy to watch as well. Seeing the witty banter between father and son makes you wish The Transporter Refuelled was a father-son adventure rather than the mess of story it turns out to be.

The quartet of beautiful babes offer little more than a strong dose of sex appeal but hey – I’m not the type of guy to complain about an abundance of eye-candy.

Despite a number of frighteningly obvious flaws, The Transporter Refuelled has enough fun and levity to make it surprisingly enjoyable. Answering the question posed earlier leads me down two paths: on one hand leaving a top quality TV show like GoT to star in a totally average film like The Transporter Refuelled is a baffling decision. On the other hand Skrein shows enough to suggest that’ll he’ll be a viable action star in the future.

The Transporter Refuelled verges on being both brilliant and bad and scores a: